We can confirm that your item is indeed marked by MAROZOV Co.  In our experience, it almost always appears with the letter B only on items made after 1884, which is also whence they used the double-headed Imperial Eagle.

Based on the history of the firm, it was founded by Ivan Ekimovich Marozov in 1849, who however died in 1885. His descendants continued operations until 1917 when they closed. The HH mark is most likely the Assayer's mark and is documented in several resources, but listed as "Unidentified - St. Petersburg - ca 1880s".

This beautiful silver Cruet Set is marked by MARTIN HALL. As you know, EPGS stands for Electro Plated German Silver. Your item dates ca late 19th - early 20thC, and the incised logo is probably the monogram of a Hotel or Restaurant or Private Club.

This seems to be a Breweriana or Pub/Hotel ware item, hence the "1 gill" measure noted on the piece. The tiny circles mark does not appear to be registered and may be a generic item made by any of the major manufacturers in the UK, probably from Sheffield or Birmingham. As you know, EPBM stands for Electro Plated Britannia Metal, where Britannia Metal is a hardened type of Pewter, hence very utilitarian or intended for frequent use.  It probably dates ca 1880s - 1910s.

This actually reads "Hostellerie Du Coq Hardi', which literally means "Hotel of the Daunting Rooster" which is a very quaint and elegant Hotel & Restaurant in France.

VERDUN is the name of a town in France where this Hotel is located, and very near the border with Germany. The Number 12 refers to the Silver Purity number in Loth silver units, a system used in Germany prior to 1886 - see our Precious Metals Units page through our EXTRA HELP section - which indicates German origin. In this case, 12 Loth is equal to .750 silver content.

Since the Loth was no longer used after 1886, it dates your Set somewhere between the Hotel's founding in 1827 and 1886. These Silver Bowls were probably made to order for the Hotel by a factory or silversmith in Germany, but the actual maker is not noted, unless there are more marks elsewhere on these bowls that are not included in the photos.

The other marks are upside-down in your photo (in opposite vertical direction to the number 12) and "HOS" are the first 3 letters of the word HOStellerie, whereas the symbol of the Rooster's Head was the logo for this Hotel, much the same way chinaware etc are monogrammed at various high-end Hotels & Restaurants.

You are correct, this is indeed of German origin - please visit our "Recognizing Country of Origin Hallmarks" page through ourEXTRA HELP section for more tips and guides on the topic.

In this case, please use our INITIALS SEARCH to find all possible matches for these maker's mark and to confirm that this lovely Tea Set was made by GOTTLIEB KURZ, located in Schwabisch Gmund, Germany, and in operation ca 1895 - 1967. Based on the style, we would estimate that your particular Silver Tea-Set was made ca 1910s - 1930s.

This "PEWTER BY RICE" logo was used by BERNARD RICE'S SONS, a company that was formed by the merger of APOLLO SILVER Co. and SHEPARD & RICE in 1899. They were located in New York, NY, USA, and closed in 1959.

They are mostly known for Silverplated Hollowware & Tableware items, but also made an extensive line of Pewter ware. Your item was probably made ca 1920s - 1950s. The number 385 is the Model Number.

In this case, "ARGENTA" is probably a trade name, but it was also used as another word for Nickel-Silver, also known as German Silver, which is an alloy of Copper, Nickel and zinc in varying proportions, usually 2:1:1 or 3:1:1).

You are correct that this company used many names and has a long history.  Here are some highlights:


To use our huge database of Silver & Jewelry makers' marks and hallmarks, including marks on other Precious metals, Pewter and other collectible Metalware, please see our Silver & Jewelry or Pewter Marks Identification Guides. 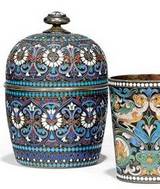